By law, smoking is prohibited in the property’s common spaces and public indoor areas, such as stairwells, sauna facilities and social rooms.

Smoking on a balcony or in a yard, for example, close to a ventilation intake, stairwell doors, or apartment ventilation windows, is not a good idea, as the smoke can easily find its way into a neighbour’s apartment or balcony, or into the building’s stairwell. This also applies to any recreational terraces of shared saunas in the building, where the smoke may linger in the sheltered area or get into the changing areas, causing annoyance to other sauna users.

In practice, there are very few ways in which smoke from a yard or another balcony can be prevented from entering another part of a property, as this would probably require the building’s ventilation system to be replaced, or substantial structural alteration works. Where necessary, the property company will attempt to establish the origins of the disruptive smoke, and whether the company has any options for intervening in the situation. 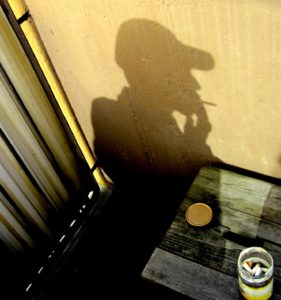